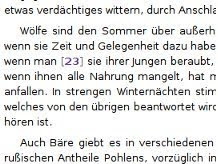 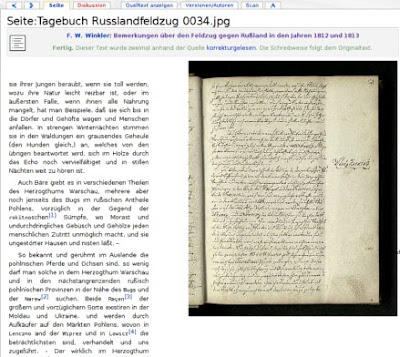 Thanks to Klaus Graf at Archivalia for much of the information in this article.
Posted by Ben W. Brumfield at 8:17 AM

I looked into Wikisource a while ago but I've never tried doing anything with it. I don't really know much about Djvu files and it seemed to be a choice between that or manually uploading and linking each page image (but I guess that could probably be automated by a bot script using the Mediawiki API).

It's really weird that they don't use wiki links for annotating the text. I would've thought that would be a really obvious thing for a WikiMedia project to do. At Your Archives it's kind of the opposite: we use wikilinks a lot for linking to people, places, word definitions etc but there's no easy way of transcribing documents within the wiki. Document transcripts are usually done outside it then pasted in when they're finished.

Now that the UK National Archives allow uploading images to the web for non-commercial use there's a lot more scope for online transcription projects. The terms are a bit vague but they definitely allow and encourage uploads to Flickr. They still wouldn't be allowed on WikiMedia Commons because the terms are too restrictive.

I guess the thing that really struck me about this is that so many of the limitations on Mediawiki's use are merely side-effects of Wikisource policy, rather than technical limitations. I also don't know anything about DjVu, but suspect that it would be quite easy to set up an alternative wikisource system for unpublished manuscripts. It could probably even have the Mediawiki publish-on-demand feature enabled.

I suspect that one reason they don't use wikilinks for annotation is the same technical issue I ran into playing with Mediawiki in 2005: difficulty separating annotation pages from source text pages. However, even for the notable persons mentioned in the Winkler text, the annotations displayed by pop-ups are in-line in the source, rather than links to the relevant Wikipedia articles. I just don't get that.

Hi there! I just tried emailing you at alpha.info about an interesting transcription project I have that I wanted to talk to you about. Unfortunately, the email bounced back to me. Is there another email address I could try contacting you at?

On german wikisource there is no rule to ban unconditionally unpublished works. In this case you have not found the example in your aticle. And we have some other unplubished works too. But you are rigth, there is a very small number of these works in wikisource.

Hi, it's true that the English Wikisource is highly preoccupied (in my opinion to an unhealthy degree) with transcribing published material from the 19th and early 20th centuries.

I agree with you that Wikisource could be and should be an extraordinary environment for collaborative work transcribing manuscripts and publishing corrected editions of texts based on manuscript evidence. The extraordinary software lets you exhibit the ms along with the typed and edited text, and simple templates can allow discussions of editorial details including citation of the evidence in the mss to be hidden within the edit page.

If you are interested, exactly this kind of work is currently being done at the Hebrew Wikisource. See here for an example of a previously lost part of a book newly published from a manuscript:

At he.wikisource we also compare various old published editions and publish corrected editions of the classics based upon them. Everything is documented as in a scholarly critical edition. In fact, this helps open up the entire process of manuscript scholarship to the public in a way that was never possible before.

For what its worth the extension used by WikiSource, ProofreadPage, now needs a maintainer. I posted about this here: http://thread.gmane.org/gmane.science.linguistics.wikipedia.technical/54831

The fastest top-up deposit-withdrawal, no more than 5 minutes, you can play. All payment guarantees are handled by the modern system vegus168 ติดต่อ ไลน์


Through www.amazon.com/mytv - how you can connect your mobile phone to Amazon Prime. Through amazon.com/mytv, you can watch your favorite TV shows, series movies. You can watch prime videos anywhere on your device. Users need to create an Amazon account if they don’t have an Amazon account and enter the Amazon my TV activation code to watch Amazon prime videos on your device.

In order to show wifi password Windows 10, you are supposed to choose the start menu, click on settings and then choose network and internet. Now, in the status section, you must scroll down and then click on network and sharing center. After that, you must click on your wifi name in the view your active networks section, and when the wifi status window opens, you can simply click on wireless properties. Afterward, you must move to the security tab and then check the checkbox next to show characters to view your wifi passwords.