This is a transcript of my talk at the Society of Southwestern Archivists 2013 Annual Meeting. 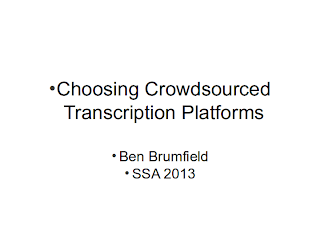 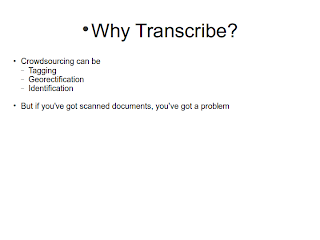 So the first question is, why transcribe? Because, after all, there are a lot of different crowdsourcing projects that are not transcription. You can do georectification. There are a lot of people doing tagging. After I'm done talking, Micah Erwin is going to give a presentation on his pretty amazing work doing crowdsourced identification of items within their collection. So why transcribe?

One reason to transcribe, is that many of us face a problem. Which is that if you have scanned documents, you have a problem: 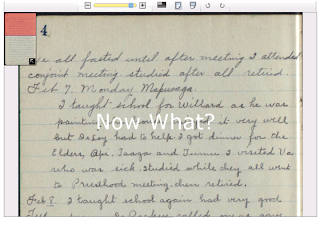 So all the serendipity that you get in the Internet age from search engines is not useful to you. Once you get these transcribed, you get the opportunity to connect with people who find you by searching for, say, their own name, and discover that you have material that contains their great-grandfather, who they're named after.

One of my most active volunteers is transcribing a diary that was written by someone he's not related to. He found out about the project because he is named after the diarist's mailman. 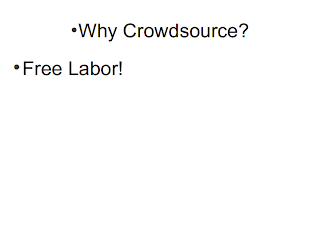 So why crowdsource, rather than doing all this transcription yourself?

Well, one argument is that it's free labor!  You're getting people to do your work for you!  This is a very powerful argument, and many of you may find it a very useful argument with your management.  It may even be an argument for putting material online that you wouldn't otherwise. 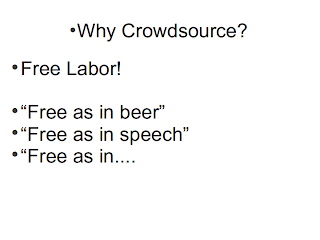 Unfortunately, that's not true.  It take a lot of effort to run a crowdsourcing project. 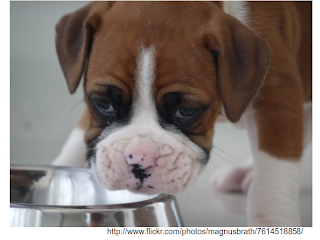 Crowdsourcing projects are really "free as in puppy".  The puppy is free, but you have to take care of it; you have to do a lot of work.  Because volunteers that are participating in these things don't like being ignored.  They don't like having their work lost.  They're doing something that they feel is meaningful and engaging with you, therefore you need to make sure their work is meaningful and engage with them. 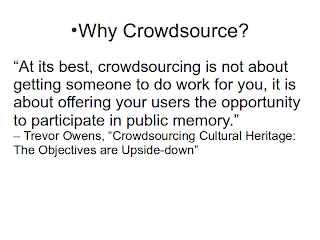 One of the most interesting perspectives on this comes from Trevor Owens at the Library of Congress.  He wrote a blog post last spring called "Crowdsourcing Cultural Heritage: The Objectives are Upside Down", in which he looked at the experience of volunteers participating in these crowdsourcing projects.  And he says that fundamentally, this isn't about getting free labor from the public.  This is about offering people a brand new and deeper way to interact with your collections: getting them to produce knowledge.  Getting them to engage more deeply with the material you put online more deeply than just a consumer experience of scanning through things. 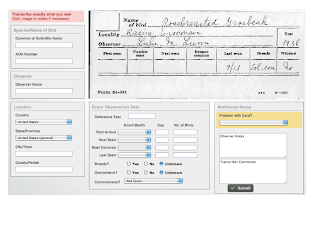 One example of that I'd like to give is a citizen science project.  The North American Bird Phenology Program is a crowdsourcing project that is inviting the public to transcribe bird observation cards that were made by amateur bird watchers a hundred years ago, over the course of about seventy years.

Now, I tried this project out because I'm interested in transcription tools.  I'm not interested in birds.  But as I was going through marking up these observations cards from these different observers, I'm not really quite sitting at my computer anymore -- I'm deeply immersed within the documents. 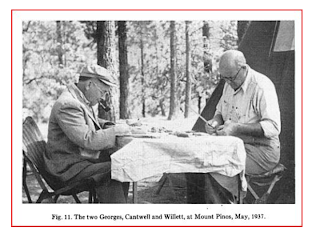 And suddenly, I'm sitting with these guys, who are sitting and writing up their observations.

So you have this opportunity to engage people very deeply -- to immerse them in your materials by offering them this kind of way of participating.

One of the examples that I like to use was a collaboration between me and Kathryn Stallard at Southwestern University--raise your hand, please Kathryn--in which she put online a diary of the Mexican-American War.  One volunteer--before we had even announced the project--went online and transcribed the entire diary.  But he didn't just transcribe it--he didn't just type what he saw.  He went back and made multiple revisions. He corrected things.  He identified names of materials and locations and battles.  He did research on the life histories of the people who were mentioned there.

This is not a consumer experience -- it's a way of pulling people into your materials.  And yes, Kathryn did get a transcript out of the results.  But I'm not sure that that was more valuable than the experience that Scott Patrick got going through transcribing, researching, and immersing himself within this diary of this Texan soldier. 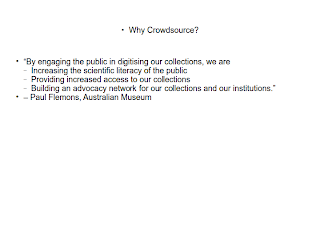 So why crowdsource?  So if you're bringing people into this experience--you're engaging members of the public who may live hundreds of miles away from your institution--what you're doing is converting them from site visitors into another kind of relationship with your institution and with your materials. 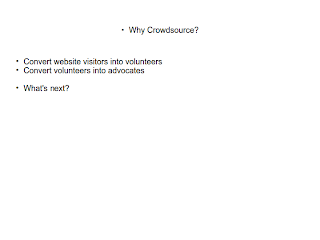 So, if crowdsourcing is a way to convert site visitors into volunteers, and to convert volunteers into advocates, what's next?

I'm not sure--this is all very new--but we're exploring this.  I'm working with an archives that possesses a popular author's drafts, and they're starting a crowdsourced transcription project.  Part of what we're trying to do with that is linking the transcription and the transcripts to a donation campaign that is designated for digitizing more of their material.

So, we don't know--I'd love to come back next year and tell you how it worked out--but I'm really interested to see if we can create a virtuous cycle among digitization, crowdsourcing, fundraising that funds digitization, and on back.  I would love to see this [succeed]. 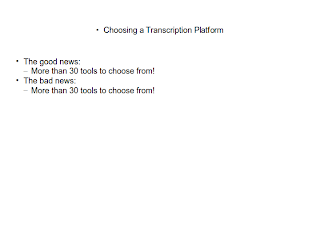 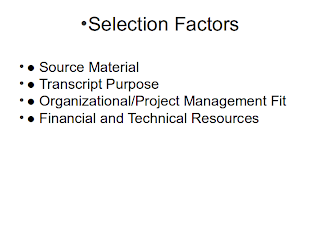 What I want to talk about instead are thing to consider when you're selecting a tool.  I group selection factors into four categories.  One of them is what kind of source material you're working with.  Another is the purpose of the transcripts -- what you are going to use those for, and maybe what the public are going to use those for.  Then there's the fit within your organization, then technical resources considerations. 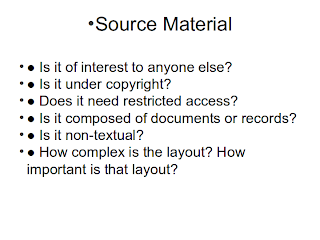 So you really need to think about what source material you're working with before you choose your platform.  People dealing with medieval manuscripts may want to work with a program which was developed for medieval manuscripts.  That program may be totally unsuitable for nineteenth-century letters.  So you really have to figure out what you're putting online first.  (Fortunately, most of the people in this room are already starting with scans -- with things they've already digitized.)

There are a lot of other factors here, but what I really want to drive home is that there are fits between particular materials and particular tools, because there is no "one size fits all" tool for transcription. 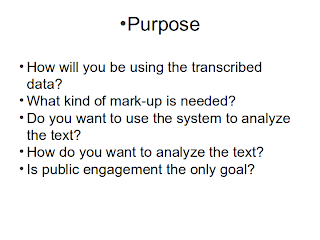 The purpose: how are you going to be using the data?  Are you going to be analyzing it?  The people who are tracking these bird observations really want a searchable database that they can go through and do climate change and habitat change analysis on.  People in this room may be more interested in extracting the subjects--the person names and place names that are mentioned within the documents.  But there are a lot of different uses, so you need to think about that. 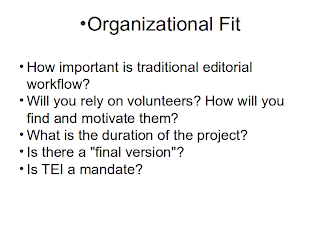 So how does this fit within your organization?  There are platforms here which can be used behind closed walls.  So maybe you have students who you want to give the job of transcribing, and you don't even want the public to be involved.  Your goal is to improve undergraduate education by getting history students to interact with primary documents.  Maybe, on the other hand, you really want to cast as wide a net as possible to engage people way outside your institution, and no one within your institution really cares about this particular material you have.

How long is the project going to last?  Traditionally, crowdsourcing projects work well with the sorts of organic institutions that most people here [represent].  They work more poorly where they are, say, funded by a one-year grant -- where after a year of building up a community and working on the material, suddenly it's pencils down; lights off! 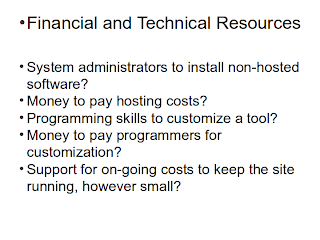 The final set of considerations are the financial and technical resources, which unfortunately may overwhelm all the other considerations.

I was talking to an archivist at a library in Belgium last month who had a set of medieval manuscripts and wanted to use T-PEN, a tool which was built specifically for medieval manuscripts.  She knew all about it; she loved it.  But her material was in Omeka; the tool didn't work with Omeka; so she was going to use Scripto.  Which is a great tool, but it just supports plain text transcripts, which isn't really suited for the material.  She knew that, but her material was here [gestures], so that was directing her decision.

I think that's a shame, but it's unfortunately an important factor.  People don't want to have to set up multiple systems.  If you have all your material in ContentDM, you don't really want step one [of a crowdsourcing project] to be get it all back out again. 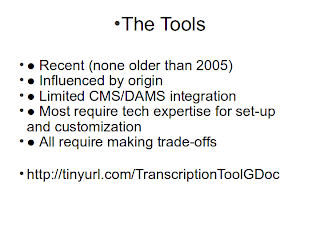 All of these tools require some customization and some technical experience to get set up and running, so you need to consider whether you have people on-site who can do that or can pay people off-site who can do that.  And then there are all the digital preservation issues, which everyone here understands very well.


So rather than going through the tools, I want to direct you to a Google document which has been contributed to by about twenty-four people who have added their own projects, explaining whether their tools support TEI or EAD, whether they support mark-up that's semantic or genetic, what their platforms are, what their rates are -- things like that. 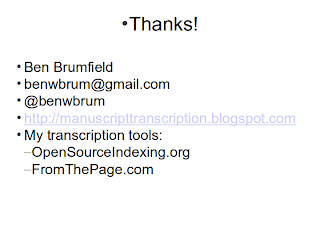 So this TranscriptionToolGDoc is something I recommend.  I love having conversations about this, so send me email and we'll brainstorm about projects.
Posted by Ben W. Brumfield at 10:14 AM

That Google doc was exactly what I've been looking for the entire n hours of searching!

I'm a software developer who has inherited a stack of scanned documents. As a complete newbie to Documentary Editing (or any of this) I was exactly as you describe in "The Collaborative Future of Amateur Editions"

Thanks for creating such an informative blog. I sure have a lot of reading ahead of me!